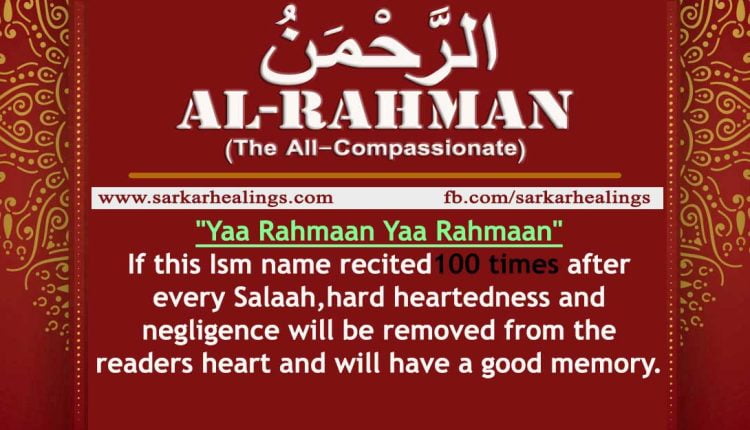 Benefits of Zikr Ya Rahmano Wazifa to change your life

Ya Rahmano The Most Lovingly Beneficent,  The Most Kind and Giving,  The Most Gracious, The Infinitely Good

The One who continually showers all of creation with blessings and prosperity without any disparity. The One who is most kind, loving and merciful.

The One whose endless, loving mercy is perfect and inclusive. The One who is overflowing with the quality of loving mercy and is continually pouring it upon all of creation.

From the root r-h-m which has the following classical Arabic connotations:

to have tenderness, gentleness, kindness
to love
to have mercy, to have pity
to show favor and goodness
to have all that is required for beneficence

The root r-h-m also indicates womb; meaning that which provides protection and nourishment, and that from which all of creation is brought into being.

Rahmān conveys the idea of fullness and extensiveness, indicating the great quality of love and mercy which engulfs all of creation without any effort or request on our part, while Rahīm conveys the idea of constant renewal and giving liberal reward to those who are deserving.

According to Ibn Qayyum (1350 AD), Rahmān describes the quality of abounding Grace which is inherent in and inseparable from the Almighty.

In Muhammad Ali’s translation of the Qur’ān, he refers to classical sources (as indicated by the initials in parenthesis) who said:

Rahmān and Rahīm are both derived from the root rahmat, signifying tenderness requiring the exercise of beneficence [kindness] (R), and thus comprising the ideas of love and mercy.

Lexicologists agree in holding that the former includes both the believer and the unbeliever for its objects, while the latter relates specifically to the believer (LL).

In the Dictionary of the Holy Qur’ān, Abdul Omar quotes from classical resources:

Rahmān is an active participle noun of the measure fa’lān which conveys the idea of fullness and extensiveness and indicates the greatest preponderance of the quality of love and mercy which comprehends the entire universe without regard to our effort or asking, even before we are born. The creation of the sun, the moon, air and water, etc are all there because of this attribute….  the term Rahmān circumscribes the quality of abounding Grace inherent in and inseparable from the Almighty.

Rahīm is in the measure of fa’īl and denotes the idea of constant repetition and giving of a liberal reward to those who deserve it and seek it. The Manifestation of this attribute is in response to and is a result of the action of the human being. That is, Rahīm indicates that which is extremely and continuously loving and merciful, and who is the dispenser of grace and love as a result of our deeds and supplications, and the One in whom the attribute is constantly and [endlessly] repeated.

The Most Gracious has imparted this Qur’an unto man. He has created man: He has imparted unto him articulate thought and speech. At His behest the sun and the moon run their appointed courses; before Him prostrate themselves the stars and the trees. And the skies has He raised high, and has devised for all things a measure, so that you too, O men, might never transgress the measure of what is right: weight, therefore, your deeds with equity, and cut not the measure short! and the earth has He spread out for all living beings, with fruit thereon, and palm trees with sheathed clusters of dates, and grain growing tall on its stalks, and sweet-smelling plants. Which, then, of your Sustainer’s powers can you disavow?

Benefits of Zikr Ya Rahmano :

Benefits of Zikrullah Ya Raheemu Wazifa

8 Benefits of Zikrullah Ya Maliku Wazifa