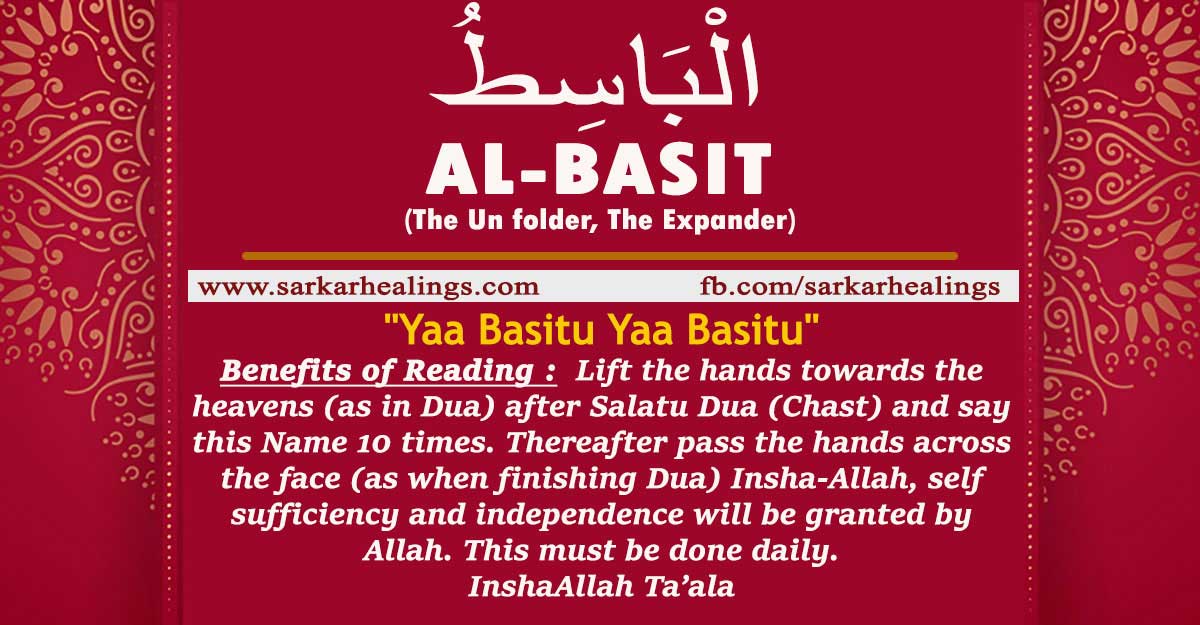 Benefits Of Zikrullah Ya Basit Wazifa

The Unfolder,  The Expander,  The Releaser

He opens His hand and releases abundance, joy, relief, and ease.  These are manifestations of His attribute al-Basit

The One who makes ample and plentiful all that is needed. The One who expands and amplifies all abundance.

The One who makes the way wide and open. The One who stretches out a helping hand to mankind. The One whose open hand releases joy, comfort and abundance.

From the root b-s-t which has the following classical Arabic connotations:

to expand, enlarge, extend
to grant abundance, to provide amply
to spread, widen, to make spacious
to extend a hand

The term Bāsit is not specifically used as a Beautiful Name in the Qur’ān.

The term Bāsit includes a powerful and majestic sense of infusing into something a gift which will grow and flourish in great abundance.

The Arabic lexicon and commentary Tāj al-‘Arūs, as interpreted by E.W. Lane, says:

Qabd [Qābid] and Bast [Bāsit] are terms applied by the investigators of truth among the Sūfīs to the two contrary states of the heart, from both of which it is seldom or never free: the former being an affection of the heart withholding it from dilation and joy; whether the cause thereof be known, as the remembrance of a sin or an offense, or of an omission, or be not known…

Benefits of Zikrullah Ya Basitu Wazifa :

Those who want Taweez, Naqash of Ya Basitu Benefits, for any problem in life, can contact by email- sarkarhealing@gmail.com or WHATSAPP