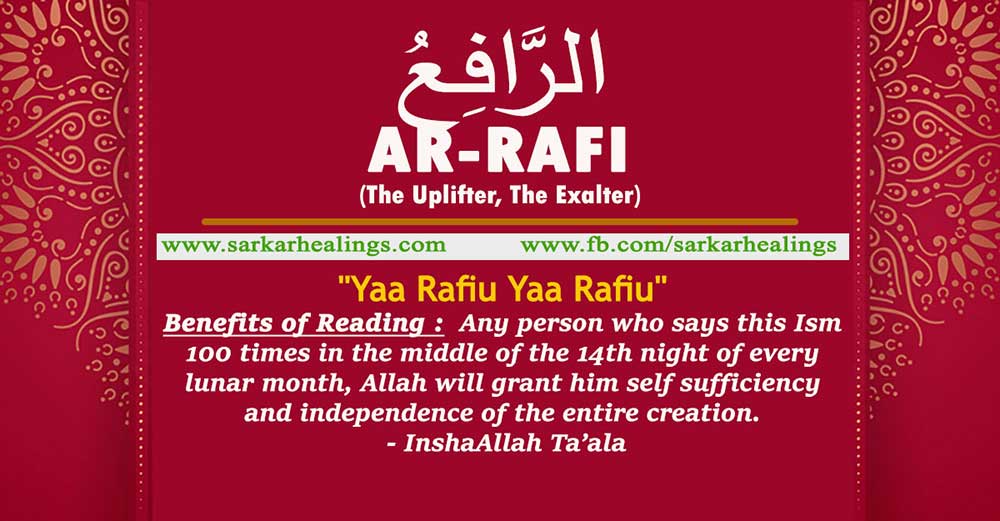 Ya Rafi The Uplifter,  The Exalter

The One whose wisdom chooses the ones to be uplifted.

The One who uplifts and elevates mankind above petty desires and selfishness.

The One who makes it possible to rise above the differences and distinctions that divide mankind.

From the root r-f-‘ which has the following classical Arabic connotations:

to raise or elevate something
to uplift, to take it up
to make high, lofty
to exalt, make honorable, make eminent
to bring a thing near

The name Rāfi’ is not specifically used as a Beautiful Name in the Qur’ān.

The names Khāfid and Rāfi’ are often used together to acknowledge the way that balance and harmony are established and maintained though the interplay of cause and effect.

Mu’izz (honorer) is similar to, but much more more intensive and glorious than, Rāfi’ (uplifter).

He is Allah, Owner of High Ranks and Degrees, the Owner of the Throne.  He sends the revelation by His Command to any of His slaves He wills, that he may warn of the Day of Mutual Meeting.  (40:15)

This name is an attribute of Allah which means the Sublime.  Allah is above any rank or degree which we can imagine.

He who repeats this name 100 times, day and night, Allah will elevate him higher as far as honor, richness and merit are concerned.

Al-Khafid Al-Rafi’ is the One who abases everyone who is haughty and mighty, and goes beyond the limits of Allah’s law, and is in rebellion.  He is the One Who raises His believing slaves through acts of obedience; He is the One Who raises the heavens and the clouds.  So have humility, and do not be arrogant.  Raise what Allah has raised by following His commands, and abase what Allah has abased by following His prohibitions.

Ya Rafi : Any person who says this Ism Ya Rafiu 100 times in the middle of the 14th night of every lunar month, Allah will grant him self sufficiency and independence of the entire creation. Insha’Allah.

Those who want Naqash of Ya Rafiu Taweez Benefits, for any problem in life, contact by email- sarkarhealing@gmail.com or WHATSAPP