Taweez In Islam is widely misunderstood in today’s Modern world. We are living the world, where every Digital Device is coded, But Islamic Scholars has given the powerful Coded Duas which are know as Taweez or Talisman. Taweez In Islam are Coded DUA, which are prepared by proper Calculation of various Quranic Verses/ ayat.

There are numerous kinds of Taweez in Islam. There is one kind which consists of writing Verses of the Quran on a piece of paper or other material. Small rugs are available which have the Ayatul Kursi (Quran: Chapter 2, Al Baqara, Verse 255) on them. Alternatively the Ayatul Kursi is printed in beautiful Arabic calligraphy and framed as a photograph. Yet another form is available where it is moulded in plastic with a clock fitted inside this plastic. All these forms of Verse – Ayat ul Kursi, in rugs, in picture frames and in clocks can even be obtained in Saudi Arabia, a country whose majority of population do not believe in Taweez.

A Talisman (from Arabic طلاسم Tillman, ultimately from Greek telesma or from the Greek word “telein” which means “to initiate into the mysteries”) is an amulet or other object considered to possess supernatural or magical powers.

A talisman is any object that is imbued with protective powers, and all cultures have manifestations of such objects. In the world of Islam, they bear Quranic inscriptions as well as images of prophets, astrological signs, and religious narratives.

Taweez Duaa is not haraam,FORGET about shirk which Our Beloved Prophet Muhammed (saw)

HAS CLEARLY SAID that after me my ummah will get involved in world,they are free from SHIRK.

It is just more or so the same with opening your hands to  ask Allah (s.w.t) for your quests. Only this time, in a written form. The Paper and the writings themselves are mere materials that has no weight or value. It is the message it entails that counts and matters, and that is the duaa {prayer}. Based of off The Quran and Hadiths; The Holy Quran is the healing for all nations. To conclude, I make firm in belief that Allah Azawajal is The See-er and The Hearer of all matters;- and to Him, all affairs get back to.

The majority of people in this day and age just copy a Taweez from a book without following the sequence and they charge money for this service. They sell the Ayats – Verses of the Quran for a small gain. Yet they have no knowledge of how the Taweez is made or how the squares need to be filled.

Since they lack the knowledge of the Taweez, they copy the Taweez without checking that the Taweez is correct or it has errors.

These days a lot of books are being printed with Taweez in them. These books are being printed for monetary reasons only. They are not checked by any person who understands Taweez. They are usually full of errors. And then these doubtful Taweez are copied by equally greedy people to give to other people who come to them. The former make their living out of copying Taweez for the latter. 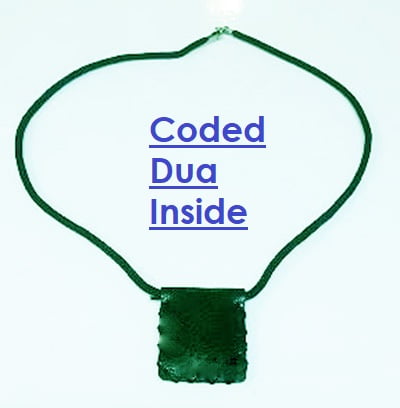 USAGE OF Taweez In Islam

Is it not ironic that the people who say “BIDAH” when it comes to Taweez, that they hang these rugs and clocks in a house to protect it? They want to protect from evil and disasters the house that is made of bricks. When it comes to protecting the REAL HOUSE which is the human body, the house of the soul, they say “BIDAH” when someone carries the Ayat ul Kursi on their person! Yet on death, the house made of bricks is left behind, and the house that was inhabited by the soul is buried like a treasure.

It is unlawful to write a Taweez to sow discord between husband and wife as it is clearly stated in Chapter 2 Al Baqara in the Quran Majeed. Generally, it is totally forbidden to write a Taweez which is against Shariat. Yet there are people out there who will do anything for money. Both the instigator and the writer of harmful Taweez will be punished by Allah in this world and the next world.

DO TAWEEZ IN ISLAM REALLY WORK?

Let us learn a very simple lesson from science first. We have all come across the term ‘DNA’.

The DNA molecule is the genetic code for every cell. And this code is the determining factor in the behaviour of a living organism.

Each molecule of DNA consists of three things namely:

3 One of four different Nitrogen compounds

Furthermore, with Genetic Engineering, an organism’s genetic, or hereditary, material is altered to eliminate undesirable characteristics or to produce desirable new ones.

The above does not answer the question whether Taweez really work. The short answer is YES! They do work. How do they work? To answer that, we need look at the Quran and Hadees.

First of all, we are told in the Quran:

82 We sent down in the Quran that which is a healing and a mercy to those who believe: to the unjust it causes nothing but loss after loss  [QURAN: BANI ISRAEEL, CHAPTER 17]

If scientists can perform genetic engineering and alter the behavioral pattern, so can the Quran as proven above from the Quran. If that is not enough then we can see the DNA code mentioned in Hadees:

Note in the above reference the period of 40 days is mentioned three times. Then we are told that the angel is ordered to write four things. Did we not find a similar description for the DNA above? Remember that the DNA is yesterday’s discovery.

The Quran and Hadees date back 14 centuries.

In Hadith comes to mind in which Hadrat Aisha (radhiallah) the mother of the believers was asked to describe the qualities and manners of Allah’s Rasool Muhammad sallal laahu alaihi wasallam:

In the above line there is secret being revealed.

DESTROYING A Taweez in Islam OR BLACK MAGIC

There are numerous ways that a Taweez can be rendered useless. The proper way to destroy a Taweez is to tear it into four pieces. That is, tear it once vertically in the middle. Then tear the two pieces horizontally so that it becomes four pieces. Read Allahu Samad 101 times on the torn pieces and dispose the 4 pieces in flowing water, such as a river. This will destroy the Taweez and its effects completely, Insha Allah.

If anyone suspects that they are under the influence of ‘black magic’, or an evil spell then they can follow the following guidelines to overcome the influence and effects:

If there is any outside evil influence, then when the person sees what / who / how the evil has been influenced, then the spell is broken immediately, Insha Allah. The above is a DO IT YOURSELF method of destroying evil spells and evil Taweez.

Finally may Allah guide us and keep us away from any evil footstep. Ameen.

Darood,Salwath (Blessings) and Salaam (Peace) on Muhammad (sallal laahu alaihi wasallam) His Family, and His Companions.