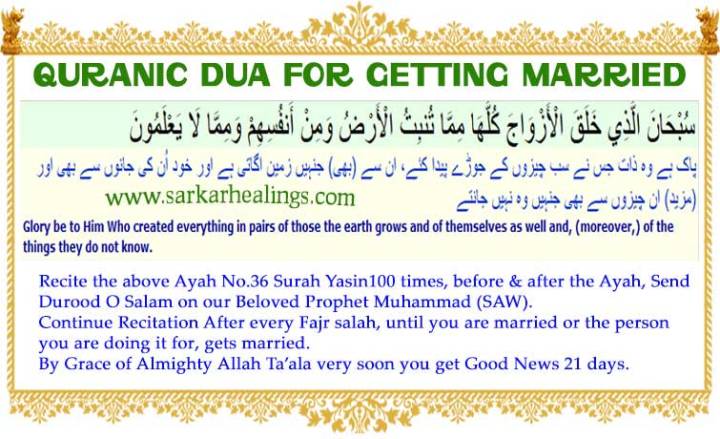 Marriage (nikah) is a solemn and sacred social contract between the bride and groom, and it is considered a great act of worship in Islam. Islam is a strong advocate of marriage, and the act of marriage is considered a religious duty through which the social unit — the family — is established. Islamic marriage is the only permissible way for men and women to engage in intimacy.

Allah Tal’ala states in the Quran: “And verily We sent messengers (to mankind) before thee, and We appointed for them wives and offspring” –

Marriage in Islam is an obligation that is greatly admired by Allah and very beloved to the prophet Muhammad (peace be upon him). The prophet himself has mentioned, “Marriage is from among my ways”, hence to get married is a sunnah and the person acting upon a sunnah of the prophet will be rewarded greatly by Allah.

At the time of Our Beloved Prophet Muhammad (peace be upon him) certain companions vouched to remain single. When the prophet heard this, he displayed his disapproval and stated that marriage was his sunnah and that of the previous prophets.

A person should also get married to increase the Ummah (followers) of the Our Beloved Prophet Muhammad (peace be upon him).

Our Beloved Prophet Muhammad (peace be upon him) said: “Marry such women who are extremely fond of their husbands and who can bare many children, so that I (the prophet Muhammad) can be proud on the day of Judgment due to your large numbers” (Abu Dawood)

Our Beloved Prophet Muhammad (peace be upon him) said:“whenever a Muslim spends on his family with the intention of gaining reward, then this is a sadaqah” (Muslim)

Duas For Marriage- 10 Different Effective Dua, Wazifa for Nikah are given below 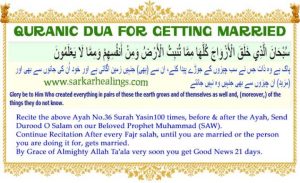 Surah Yasin is also known as the heart of the Quran because of its limitless blessings. As per them, Surah Yasin solves all problems related to getting married soon.

Do these following thing after any prayer per day;

Pray for yourself or your daughter or son to get marriage proposal soon.

Recite Surah Maryam after any salah, once per day. This can only be done by the Girl or her mother only.

Recite 2 Rakaah salah any time then recite 11 times Durood Shareef. Then recite the Tasbeeh of Fatima Zahra (RA) which is;

Those who want Taweez, Naqash for Marriage, can contact by email- sarkarhealing@gmail.com or WHATSAPP