This Surat, which is in fact a Surat on the purification of the ‘carnal soul’ and sanctification of the heart from vice and impurities’, explains the same themes as in previous Suras, but at the beginning of the Surat eleven great subjects from the world of creation and Divine essence are mentioned and to prove that salvation depends upon ‘purification of the carnal soul’ some oaths are made. These oaths envelop most of the Qur’anic oaths collectively.

At the end of the Surat, the Thamood, as an example or a disobedient people, are briefly pointed out. They defied Allah’s sacred Law and His prophet, Salih (as), and were destroyed for their crime; which was the fruit of neglecting ‘the purification of the carnal soul’.

This short Surat, in fact, restates one of the most important instructive points for the destiny of Man’s life, and leads him to true Islamic values. 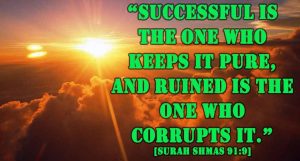 Hadith Surah Shams: It was narrated from Abdullah bin Buraidah, from his father (رضي الله عنهم), that The Messenger of Allah (صلى الله عليه وآله وسلم) used to recite ‘By the sun and its brightness’ and similar surahs in Isha’.

Narrated that Abu Hurairah (رضي الله عنه) said “I have never prayed behind anyone whose prayer more closely resembled that of the Messenger of Allah (صلى الله عليه وآله وسلم) than so-and-so. We prayed behind that person and he used to make the first two rak’ahs of Zuhr lengthy and the last two shorter, and he would make ‘Asr shorter; in Maghrib he would recite the short Mufassal surahs. In Isha’ he recited: ‘By the sun and its brightness and similar surahs, and in Subh he recited two lengthy surahs.”