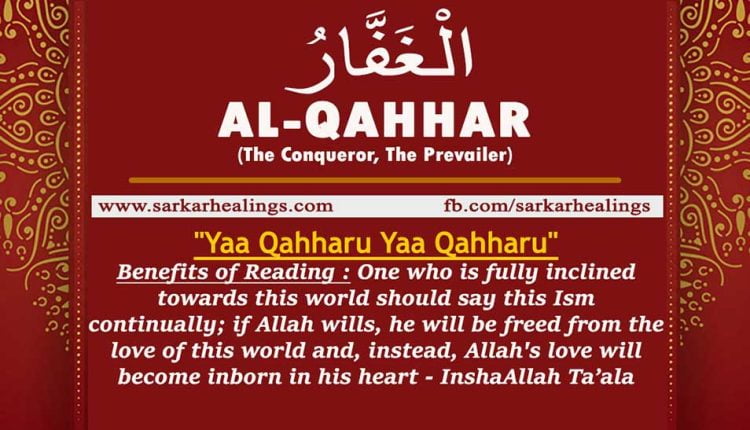 Benefits of Zikrullah Ya Qahhar Wazifa

The One who prevails over all of creation. The One who overcomes all obstacles.

The One who is victorious over any opposition. The One whose will is irresistible.

The One who is dominant. The Ever-Dominating One.

The One who is master of all. The One to whom all submit.

From the root q-h-r which has the following classical Arabic connotations:

to overcome, conquer
to overpower, master
to dominate over, prevail
to subdue, subjugate,
to compel against one’s wishes

The names Qahhār (ever-dominating, overpowering) and Latīf (subtle, refined) are sometimes used together to honor and appreciate the opposing, yet complementary, ways of the One.

Qawī – Strong – the One who is all-mighty and possesses inexhaustible strength.

Matīn – Firm – the One whose nature it is to be firm, determined and steadfast.

Qahhār – Dominator – the One who dominates, conquers, overpowers

Muqtadir – Determiner – the One who uses supreme power to enforce whatever Divine wisdom decrees or decides.

This name is derived from a word meaning dominance. The Dominant is One Who has greater Commanding influence even on the influential.  The human being can claim that he holds complete dominance over another human being, but Allah has full control over our body, spirit, and movement.  He is Dominant in a way in which He can do anything He wills.

Repeat this name 66 times to control worldly desires, and gain spiritual contentment and inner peace.  The repetition of this name also protects you from doing evil deeds.

Al-Qahhar, the Vanquisher Who overcomes His creation by His authority and power.  He is the One who drives them into what He wills, voluntarily or involuntarily. Everything submits to His majesty, so submit to the Order of Allah, and to His prohibitions, and do not disobey Him.

Benefits of Zikrullah Ya Qahhar:

1. If you have financial problems, then do the Zikrullah of Ya Qahhar 1100 times at night before going to bed, and see the blessings of ALLAH, You will get money from sources , which was never in your mind.

3. To remove the evil effects of black magic recite “Ya Qahharu” 1100 after every Namaz.

4. Recite Ya Qahharu 1100 times twice a day to get rid of domestic problems.

5. Recite Ya Qahharu 100 times after fajr salah to overcome your enemy.

6. If you do this Zikrullah of Ya Qahhar frequently, to gain inner peace and be freed from being wronged by another.

Benefits of Zikrullah Ya Musawwir Wazifa

Benefits of Zikrullah Ya Wahabu Wazifa