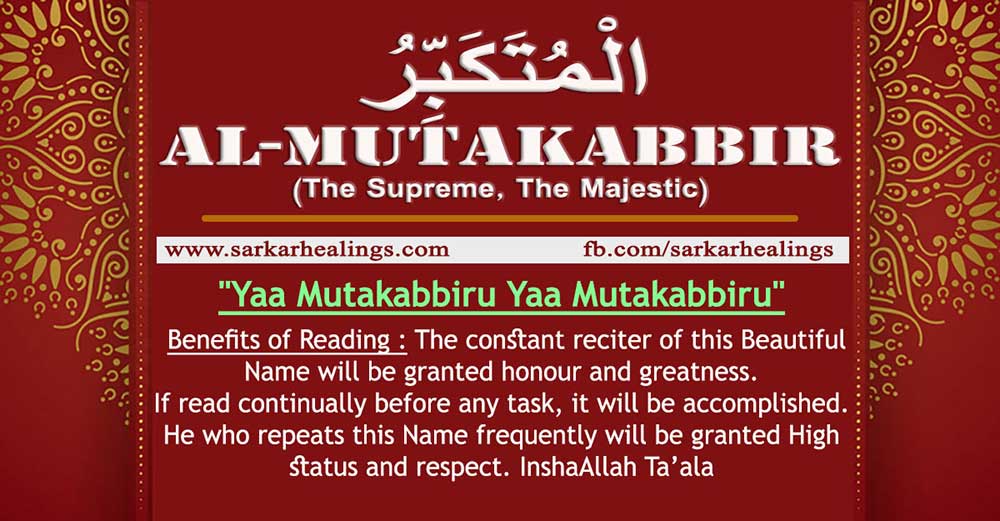 Ya Mutakabbir Wazifa Benefits of Zikrullah

The Supremely Great,  The Possessor of all Rights,  The Perfection of Greatness

The One who manifests greatness in all things and in all ways.

The One who has rights, privileges and attributes which others have not.

From the root k-b-r which has the following classical Arabic connotations:

Mutakabbir is an empathic form of the root k-b-r which denotes actively using rights, privileges and attributes that are above and beyond the rights of everyone else. In mankind, this would be called pride or arrogance, but for the One this is simply the truth.

Al-Qurtubi reported that this name was understood to mean Grand, Great One.

Jalīl is considered to be greatness in attributes.

Kabīr denotes the One whose essence is greatness.

Azīm is greatness in both attributes and self.

Mutakabbir is an empathic form which denotes actively using rights, privileges, rank and attributes that are above and beyond the rights of everyone else.

IF You need Spiritual guidance for any problem in life, You can send contact by email- sarkarhealing@gmail.com or WHATSAPP

Ya Mutakabbir Wazifa Benefits of Zikrullah