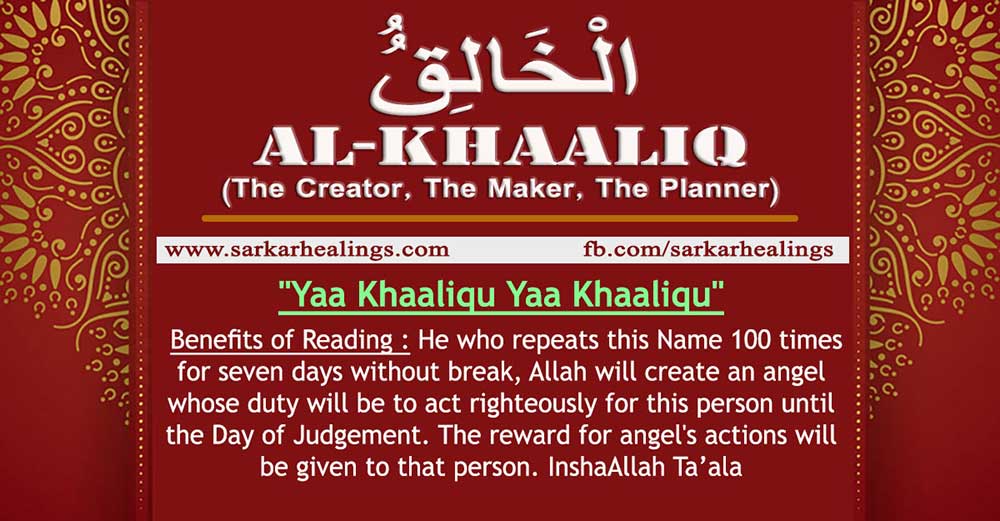 The Creator,  The Planner

The One who determines and creates according to the proper measure and proportion of each thing. The One who plans and determines how, when and where to create.

The One who brings things into existence from a state of non-existence. The One who has the power to change things back and forth between the states of existing and non-existing.

From the root kh-l-q which has the following classical Arabic connotations:

Badī’ denotes the One who creates in wonderful, amazingly original ways that have no precedent whatsoever, ways that are awesome innovation.

Khāliq denotes the One who continues to plan, measure out and create, and who has the power to change things from non-existing to existing.

Musawwir denotes the One who arranges forms and colors, and who is the shaper of beauty.

Mubdi’ denotes the One who starts or begins all things, or that which has precedence given to it.

(Also written as al-khaliq, al-khaaliq, the Creator: ya khaliq, ya khaaliq)

Those who want Taweez, Naqash of Ya Khaliq Benefits, for any problem in life, contact us by email- sarkarhealing@gmail.com or WHATSAPP