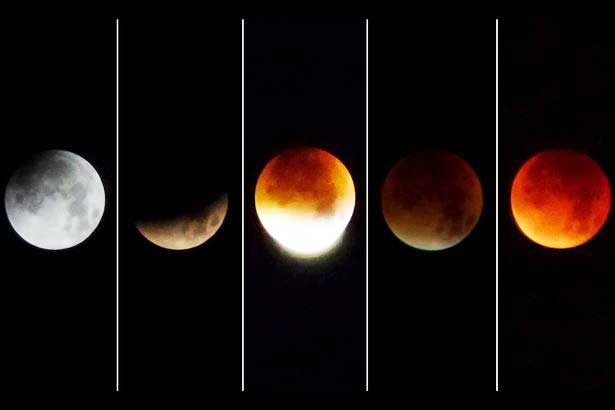 We are about to witness a blood moon during a total lunar eclipse.

The rare event – on the night of a super-moon when the moon appears bigger than usual – will take place in the early hours of January 21.

During the eclipse, the moon will turn blood red – or at least a coppery colour – and it is admittedly an eerie and rather ominous sight.

It’s easy to imagine what ancient tribes might have thought when they saw such an astronomical phenomenon.

Even today, doomsayers claim such events herald the end of the world, quoting passages from the Book of Revelation in the Bible and also the Book of Joel in the Hebrew Bible.

And for some other religions, eclipses have their own meaning and significance.

Among them, Muslims have their own views and reactions to such events – and this is what they believe.

What do eclipses mean in Islam?

Muslim worshipers traditionally say special prayers during a solar or lunar eclipse.In the past there was much fear and superstition surrounding such events, with many believing they were a warning of impending disaster.

There was a solar eclipse when the prophet Muhammad’s son Ibrahim died and some thought the sun was darkened because of this tragedy and the grief and mourning it caused.

As the science of astronomy developed and it became possible to predict eclipses, it was clear they were not unexpected reactions to a current human event but part of the clockwork of the cosmos – the normal motions and cycles of stars, planets and moons.

The prophet is quoted as saying: “The sun and the moon are two of the signs of Allah. They do not eclipse because of the death or life of someone. So when you see them, call upon Allah and pray and give in charity.”

But it’s still said that Allah uses eclipses to make his devotees afraid.

They are said to be a reminder of what will happen on the Day of Judgment or Day of Resurrection after the end of the world when “the sun will be wound round and will lose its light and be overthrown and the stars will fall, and the sight will be dazed, the moon will be eclipsed and the sun and moon will be joined together (by going into one another, or folded up, or deprived of their light).”

Islam QA says: “Solar and lunar eclipses are two of the signs of Allah with which He scares His slaves and reminds them of some of the things which will happen on the Day of Resurrection. This is why Muslims should be alarmed by eclipses.”

But, according to ThoughtCo: “In modern times, superstitions and fear surrounding solar and lunar eclipses have diminished.

“However, Muslims continue the tradition of praying during an eclipse, as a reminder that Allah alone has power over all things in the heavens and on earth.”

Whatever the personal beliefs held today, it is customary in Islam to hold prayers during an eclipse Blood Moon eclipse 2019.

The moon plays an important part in Muslim life, as the Islamic calendar is based on the moon. All months and events are determined by a sighting of the first crescent of the new moon.

The scholars agree that the prayer of the eclipses is a confirmed sunnah which is to be performed by both men and women. It is recommended to pray it in congregation although the congregation is not a condition for it. The sunnah is to be performed in a mosque as the Prophet (peace be upon him) went to the mosque immediately after the solar eclipse appeared. It’s also permissible for women to attend the congregation of the solar and lunar eclipse as `A’ishah and Asmaa bint Abi Bakr (may Allah be pleased with them) prayed with the Prophet at the mosque.

The people are called to it by announcing As-Salatu jami`ah “prayer in congregation.” The majority of the scholars hold that it is to consist of two rak`ahs (unit of prayer)and that in every rak`ah one is to perform two bowings (ruku`) instead of the customary one.