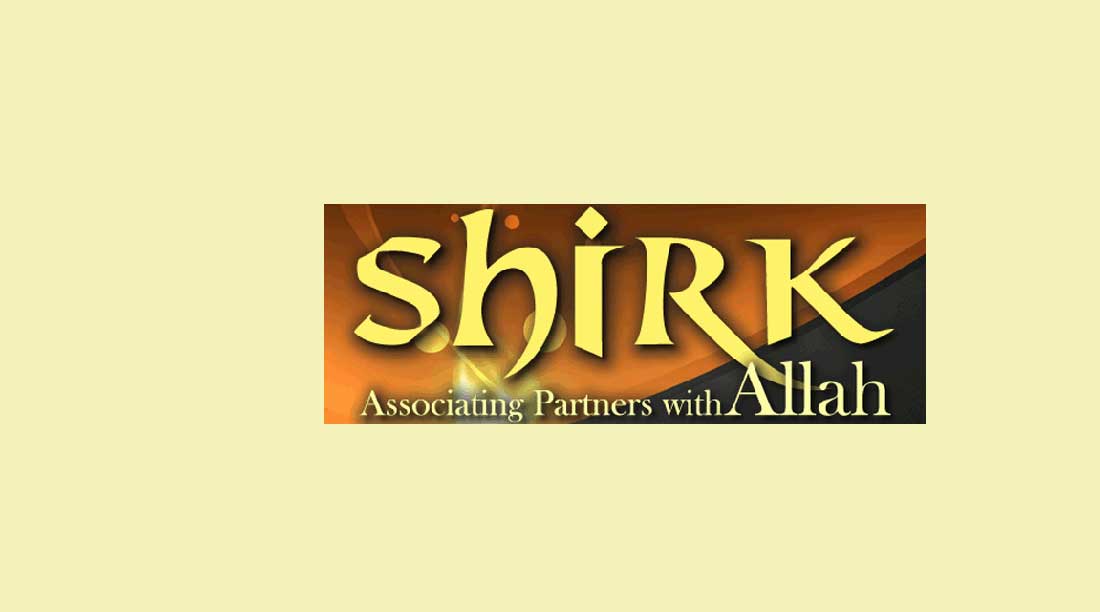 What is Shirk ? The Biggest False Accusation

Of SHIRK On Majority Of MUSLIM UMMAH

Shirk, (Arabic: “making a partner [of someone]”) meaning,associating ALLAH with other deities.The Quran calls people to accept the oneness of Allah and severely prohibits people from associating partners with His personality or attributes.

Excatly What is Shirk ?

Associating partner’s with ALLAH, which is a Muslim will never do after Reading the Kalima, La ilalaha illal la – There is no God but Allah, then all our worships {Ibadahs} shud be for Him alone. When we do believe in that there is only one God, then why is there any need to ascirbe partners to Him ? When He is our Creator, why shud we associate any other false ones.

Shirk is to associate partners with Allah swt.

In fiqh (Islāmic jurisprudence), shirk became legally equivalent to kufr (unbelief ). Those Muslims who profess it are considered outlaws who should be ousted from the Muslim community; all their legal rights are suspended until they denounce their polytheistic beliefs.

Today, some people, who obviously have no fear of Allah, accuse the simple Muslim of Shirk. This is in spite of the fact that Islam and Shirk are two opposing and mutually exclusive phenomenon – Islam came to seek out the roots of Shirk! Further, just as committing Shirk is a major crime, falsely accusing a Muslim of Shirk is also a severe crime.

The Prophet said “Verily, I fear about a man from you who will read the Qur’an so much that his face will become enlightened and he will come to personify Islam. This will continue until Allah desires. Then these things will be taken away from him when he will disregard them by putting them all behind him and will attack his neighbour with the sword accusing him of Shirk. The Prophet was asked – which of the two was commuting Shirk – the attacker or the attacked. The prophet replied – the attacker (the one accusing the other of Shirk).

By the grace of Allah, the aforementioned hadith proves that accusing the Ahl-e-Sunnah wal Jamaat of Shirk over every little matter is baseless. In the light of this hadith the judgement issued against us, rather than fitting us, returns back to the accusers and rests with them.

It seems appropriate to define Shirk in the light of the Qur’an and Sunnah. There are 3 types of Shirk – Shirk in Worship, Shirk in Personality and Shirk in Attributes.

“So whoever hopes for the meeting with his Lord, let him work righteousness and associate none as a partner in the worship of his Lord”
Qur’an, Surah Al-Kahf, verse 110

“And your Lord has decreed that you worship none but Him”
Qur’an, Surah Bani Israel, verse 23

In negating Shirk in personally and attributes Allah states:

“By Allah we were truly in a manifest error, When we held you (idols) as equals with the lord of all the worlds”
Qur’an, Surah As-Shu’raa, verse 97 & 98

These verse clearly show that Shirk in Worship, Shirk in personality and Shirk in Attributes are grave crimes. Allah states that Shirk is a major travesty.

By Allah! We (Ahle Sunnah) do not commit Shirk in either the worship of Allah nor in His personality and nor in His Attributes.

It seems necessary to allay any suspicions and confusions by establishing 3 definition of Worship.

Numerous other Mufassireen have provided a similar definition that lbadah is to express the utmost humility in front of someone.”

However the heart does not find contentment from such a definition for the following reasons.

This verse reveals that although the mushrikeen showed humility before idols, it was not the utmost level of humility. This, they reserved for Allah.

Thus, explaining ibaadah as only the ultimate level of humility leads to difficulty. We must conclude in the light of the above that worship is not simply humility and submission. Rather, worship is to display humility and respect for an entity whilst believing it to be absolute and self existent”

If humility is displayed for someone, if respect is shown for someone whilst considering him not absolute and self-existent – but rather as creation and non-absolute – then this humility is reverence and not worship.

To clarify this further, a number of examples are presented:

In prayer, we stand with our arms folded in decorum. Whilst recognising Allah as absolute and self-existent our standing with folded arms is regarded as worship.

However, when we stand with arms folded in respect before our father, teacher or master, recognising them as creation and dependant, this action is considered not worship but respect.

After performing the ruku in prayer, we stand with open arms in decorum, regarding Allah as absolute and self existent such as stance in prayer is deemed as worship. However, for example, during the national anthem, people also stand with arms at their side, but this action is not seen as worship but is considered respect.

The Angels prostrate before Allah considering Him absolute and self-existent and such a prostration is rightly recognised as worship. However, these same angels prostrated before Hazrat Adam, but not whilst considering him as a deity but as a creation and the beloved of Allah. Instead of him being absolute and self-existent, they recognised him as a dependent. Thus this prostration of theirs was a sign of respect and not worship.

Thus worship is not simply humility and submission or the utmost level of humility but it is the respecting and submitting to an entity considered as absolute and self-existent.

Note: In Islamic Shariah, a prostration of respect is not permitted.

For Spiritual Guidance and Roohani Help, you can WHATSAPP

What is Shirk ? The Biggest FALSE ACCUSATION OF SHIRK