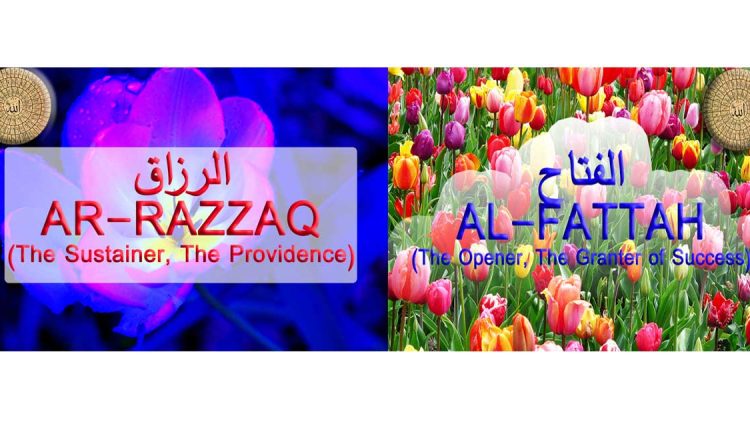 There are 99 Names of Almighty Allah Ta’ala, Amongst Asma ul Husna, Ya Razzaq Ya Fattahu,  given by Sufi Master to the seekers / students for many benefits.

There are Huge Benefits Zikrullah, every Zakir, will see how things are changing over the time. Dhikr is must for everyone, there has been huge research on various effects, few you can read on ALLAH O AKBAR page .

Soon We will upload lots of Videos’ on Our YouTube Channel.

The Opener,  The Revealer,  The Granter of Success

The One by whose guidance that which was closed is opened and the unclear is made clear. The One who lifts veils and who opens the heart.

The One who unties the knots, and softens that which was hardened. The One who continually offers goodness and mercy.

The name of first chapter of the Qur’ân, al-Fâtiha, is based on this same root, and is generally translated as The Opener, or The Opening.

The Arabic word miftâhî, translated as key, meaning that which opens or unlocks, is also based on this same root.

(Also written as al-fattah, al-fattaah, the Opener, the Revealer: ya fattah, ya fattaah)

The Arabic word miftâhî, translated as key, meaning that which opens or unlocks, is also based on this same root. (Also written as al-fattah, al-fattaah, the Opener, the Revealer: ya fattah, ya fattaah)

The Provider,  The Providence,  The Supplier,  The Bestower of Sustenance

The One who creates all means of nourishment and subsistence. The One who is the giver of all things beneficial, both physical and spiritual. The One who provides everything that is needed.

The One who causes the means of subsistence to come. The One who bestows all means of support and growth, for the body, the mind and the spiritual life.
From the root r-z-q which has the following classical Arabic connotations:

to receive something beneficial, especially as a gift
to be provided with the necessities of life
to receive a portion, share or lot
to be supplied with a means of subsistence

The root r-z-q points to the idea of the receiving of anything beneficial, particularly a gift, whereby something is nourished, sustained, or helped to grow physically, mentally or spiritually.