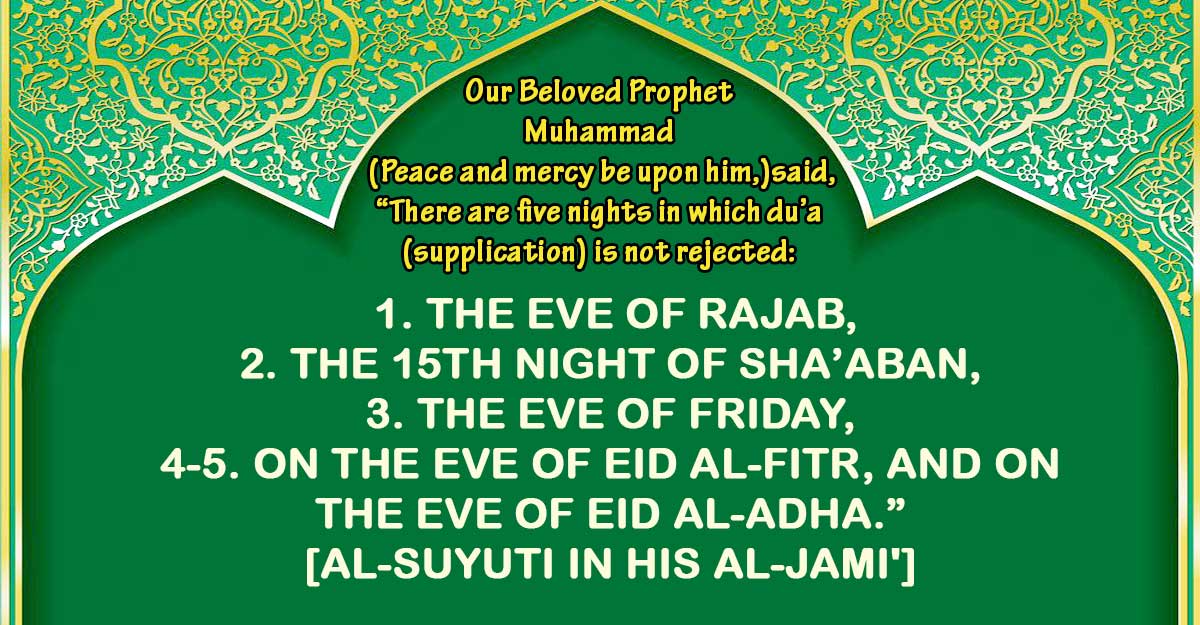 Shabaan is the 8th month (Sha’ban) of the Islamic lunar calendar. the 15th night of the month of Shabaan is known as Laylatul Bara’ah or Laylatun Nisfe min Sha’ban in the Arab world, and as Shab-e-barat in in the Asian subcontinent.

One of the significant feature of the month of Sha`ban is that it consists of a night which is termed in Shari`ah as “Laylatul-bara`ah” (The night of freedom from Fire). This is the night occurring between 14th and 15th day of Sha`ban. Traditions of Prophet Muhammad(peace be upon him)  , prove that it is a meritorious night in which the people of the earth get special Divine Mercy.

On the day immediately following the Night of Bara`ah, i.e. the 15th of Sha`ban, it is mustahabb (advisable) to keep fast. Prophet Muhammad(peace be upon him)  is reported to have recommended this fast emphatically. A large number of the predecessors (salaf) of the Ummah have been observing the fast of the 15th of Sha`ban.

We should make an invitation to feed people on that night, to remember Allah (swt) and to remember His Prophet(peace be upon him)  , and to fast its day and pray its night.

Allah willing all these acts shall be rewarded for it. There is one night in the year when Allah (Soobha Nahu Wata’ala) gives the knowledge to the Angels, about what is going to happen in the following year, for example, who is going to die, who will be born, who will be ill and how much food people will have in the year, etc. scholars like Ikramah who is student of Abdullah bin Abbas (Radi allahu unho) says that night is 15th of Shabaan.

There is a Hadith which Imam Tabari (Radi allahu unho) writes: Prophet [May Allah bless Him and grant Him peace] said, ‘From Shabaan to Shabaan there is a decision made of who is going to die, be married and some people get married but their names are written in the death program.

Imam Suyuti says: As for the night of mid-Sha`ban, it has great merit and it is desirable (mustahabb) to spend part of it in supererogatory worship. [Haqiqat al-sunna wa al-bid`a aw al-amr bi al-ittiba` wa al-nahi `an al-ibtida Page No. 58]

Hadith #1 :‏Translation: Narrated by Aisha (radiyallahu anha) I missed Allah’s Messenger (صلى الله عليه وسلم) during the night and found him in al-Baqi’.(this is a graveyard near Madina)

He said: Were you afraid that Allah and His Messenger would deal unjustly with you?

I said: Allah’s Messenger, I thought that you had gone to some of your other wives.

He (the Prophet) said: Verily Allah, the Exalted and Glorious, comes down to the heaven of the world in “the middle night of Sha’ban” and forgives sins even more abundant than the hair of the goats of Kalb.

— Note : – (Imam Tirmidhi(r.a) has created a separate chapter in Sunan Tirmidhi titled Concerning fifteenth of Sha’ban in the BOOK ON FASTING.)

Hadith #2 :Translation: Narrated by Abu Musa al-Ash’ari Allah’s Messenger (صلى الله عليه وسلم) said, Allah, the Exalted and Glorious looks down on “the middle night of Sha’ban” and forgives all His creation. except a polytheist or one who is mushahin.

Hadith #4 :Translation: It is related by Abu Thalaba that the Blessed Prophet (صلى الله عليه وسلم) said: “On the 15th night of Shabaan,Allah looks over at his creation and forgives all the believers except for the one who begrudges and hates. He leaves them in their enmity.” ► [Bayhqi, Tafsir ad-Dar al-Manthur Under the Verse 44:3]

Hadith #5 : Translation: It is related by Muaz bin Jabbal that the Blessed Prophet (صلى الله عليه وسلم) said: Allah looks at His creation in “the night of mid-Sha`ban” and He forgives all His creation. except for a mushrik (idolater) or a mushahin (one bent on hatred). ► [Ibn Hibban, Sahih, ed. Shu`ayb Arna’ut Volume 012: Hadith Number 5665]

Imran bin Husain (ra) reported Allah’s Messenger (صلى الله عليه وسلم) having said to him or to someone else: Did you fast in the “Middle of Sha’ban?“

Thereupon he (the Holy Prophet(Peace be upon him) said: If you did not observe fast, then you should observe fast for two days. ► [Muslim Book 006, Number 2607]

What should be done in this Shab E Barat night ?

On the Holy Night of 15th Shaban, after Maghrib or Isha prayer it is traditional practice to read Surah Yasin three times, and after each time, read a special du`a with the following intentions:

We should make an invitation to feed people on that night, to remember Allah (swt) and to remember His Prophet(peace be upon him)  , and to fast its day and pray its night, will be rewarded for that night and for whoever observes it.In order to observe the Night of Bara`ah, one should remain awake on this night as much as possible. If someone has the opportunity, he or she should spend the whole night in worship and prayer. However, if one cannot do so for one reason or another, he can select a considerable portion of the night, preferably of the second half of it for this purpose.

The Night of Bara`ah is a night in which special blessings are directed towards the Muslims. Therefore, this night should be spent in total submission to Allah Almighty, and one should refrain from all those activities which may displease Allah.

Fasting on the 15th Shaban

On the day immediately following the Night of Bara`ah, i.e. the 15th of Sha`ban, it is mustahabb (advisable) to keep fast. Prophet Muhammad   is reported to have recommended this fast emphatically.

A large number of the predecessors (salaf) of the Ummah have been observing the fast of the 15th of Sha`ban.

Therefore, it is advisable to fast the 15th of Shaban as an optional (nafl) fast. One can also keep a fast of qada (make-up) on this day and it is hoped that he can also benefit from the merits of this fast.

SUPPLICATION ON THE NIGHT OF 15th SHA’BAN

O Allah! You shower favours on everyone
And no one can do You any favour.
O The Possessor of Majesty and Honour,
O The Distributor of bounty and rewards,
There is no one worthy of worship except You.
You help the fallen
And provide refuge to the refugees And give peace to those who are in fear.

O My Lord! For the sake of Your Divine Manifestation
On this fifteenth night of the blessed month of Sha’ban
In which You issue all Wise and Irrevocable Decrees
Remove from us all calamities and hardships,
those that we know about as well as those that we don’t,
while You know everything.
Truly, You are the Most Powerful, Most Generous.

And may Allah the Exalted shower blessings and peace on
Sayyidina Muhammad, and on his family and his companions
And all praise is for Allah, Lord of the worlds.