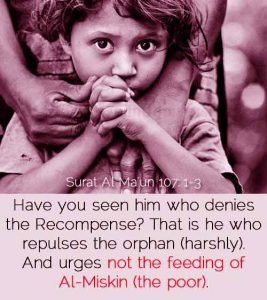 Surah Manu (Arabic: سورة الماعون‎, “Small Kindnesses, Almsgiving, Have You Seen”) is the 107th sura of the Qur’an with 7 ayat. Many commentators believe that this Surah was revealed at Mecca. The tone of the verses, which are short and awakening about the Hereafter, and the deeds of the deniers of the Judgement Day, attests to this idea.

On the whole, the deeds and characteristics of the deniers of the Hereafter are stated in five references. Consequently, they deny the Final Judgement, repulse giving charity on the path of Allah, or helping the orphan and the indigent. They are heedless of their prayers, by saying them only hypocritically, and refuse to supply even neighbourly needs.

On the occasion of the Surah’s revelation, some have said that it was revealed about Abu-Sufyan who used to slaughter two big camels every day from which he and his men ate. But one day it happened that an orphan came to his door and asked for some help. Abu-Sufyan beat him with his stick and repulsed him.

Nowruz 2020 the Major Planetary Event Get the best out of…

Some others have said that the verse was revealed about Walid-ibn-i-Muqayrah or ‘As-ibn-i–Wa’il.

Muqatil and al-Kalbi said ,This Surah was revealed about al-‘As ibn Wa’il al-Sahmi. And Ibn Jurayj said: “Abu Sufyan ibn Harb was in the habit of slaughtering two camels every week. On one occasion, an orphan came to him asking him for something. Abu Sufyan responded by hitting him with a stick. And so Allah (سبحانه و تعالى) revealed

Surah Manu Benefits: Recitation has countless benefits of Surah Manu, few are given below

Nowruz 2020 the Major Planetary Event Get the best out of…