Surah Inshirah (The Expansion) Number of Verses: 8
It is commonly said that this Sura was revealed soon after Surat Duha and its contents confirm this since, again in this Surat some of the Divine Bounties are counted for the holy Prophet (S).

A careful examination of the contents of these two Suras leaves no doubt that they are quite closely related to each other. Again, a similar case is found for Surah Fil and Sura t Quraish which will be dealt with later.

The above statements make it clear that this Surat (Inshirah) has been revealed in Mecca, but with regard to the verse:

“And We exalted for you your reputation”,

some believe that it has been revealed in Medina when the name of the Prophet (S) and Islam had been known everywhere. But, this statement is not enough to prove their idea, because the Prophet (S), with all the problems that he had in Mecca, was completely known and his rise and invitation to Islam were talked about everywhere and in most gatherings, and also his reputation was spread in all parts of Arabia, especially in Medina, by the annual gathering of Hajj pilgrims.

Gabriel (عليه السلام) came to the Messenger of Allah (صلى الله عليه وآله وسلم) while he was playing with his playmates (in his childhood when he lived among Banu Sa’d). He took hold of him and lay him prostrate on the ground and tore open his breast and took out the heart from it and then extracted a blood-clot out of it and said:

That was the part of Satan in thee. And then he washed it with the water of Zamzam in a golden basin and then it was joined together and restored to it place. The boys came running to his mother, i. e. his nurse, and said: Verily Muhammad has been murdered. They all rushed toward him (and found him all right) His color was changed, Anas said. I myself saw the marks of needle on his breast. 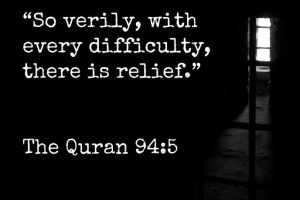