In The Name of Allah, The Beneficent, The Merciful 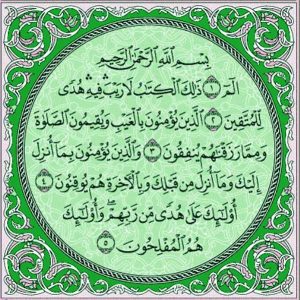 ​Surah Baqarah is the 2nd surat of the Quran, the largest in length, revealed over several years,consists of 286 verses, 6201 words and 25500 letters.Surat al-Baqarah is special in many ways. Although all surahs of the Quran are miraculous and of divine origin.

Our Beloved Prophet Muhammad (SalAllahu alayhi wasalam) singled out some of them and told us of their different virtues and blessings. Surat Baqarah the longest Surat in the Quran. It was the first Surat to be revealed at Medina, but different verses were revealed at different times, covering quite a long period so much so that the verses with regard to riba (interest or usury) were revealed in the final days of Muhammad, after the conquest of Makkah (Maariful Quran).

Surat al-Fatihah is the introduction to the Quran. As such, Surah al-Baqarah can be regarded as its first chapter. In this surah, Allah (swt) introduces us to the Quran, and tells us about three different types of people –

The rest of the surat is a beautiful blend of history, life lessons, and instructions.

There are several hadith that inform us of different virtues of this surah. Let us look at some of them.

Hazrat Abu Huraira (RH) reported that the Messenger of Allah (SalAllahu alayhi wasalam) said, “Do not turn your houses into graves. Shaitan is barred from any house in which Surat al-Baqarah (2) is recited.” [Muslim 780, 4: 1707]

Protection Against Devils
The power of this surat as a protection against Shaitan is described in different ways in the hadiths. The Prophet (sa) said that Shaitan flees from a house where Surat al-Baqarah is recited. (Muslim 780) He also said that magicians cannot confront this surah. (Muslim 804) He also pointed out the virtues of some specific ayat or sections of this sura. He said, for example, “If somebody recited the last two verses of Surat al-Baqarah at night, that will be sufficient for him.” (Bukhari 5009)

Many of us know the virtues of Ayatul Kursi, which is a part of this blessed surah. If you recite it when you go to bed, you will be guarded from Shaytan until dawn. (Bukhari 5010)

Abu Ummamah (radiAllahu anhu) narrated that the Messenger of Allah (peace and blessings be upon him) said, “Whoever recites Ayat Al-Kursi immediately after each prescribed Prayer, there will be nothing standing between him and his entering Paradise except death.” [an-Nasa’i, Ibn Hibban, Darimi 3249/A]

Surah Baqarah Benefits are Unlimited few are as below

What is the benefits of surah baqarah ?

There are Numerous Surah Barqarah Benefits. Surah al Baqarah helps to protect the person who recites it against the evil eye, witchcraft, evil whispers, and it also brings immense barakah into one’s time and overall peace in life.

Ayatul Kursi is an Ayah of Surah Al-Baqarah (verse 255). Prophet Muhammad (SAW) said it is the most important Ayah in the Quran . There are Countless benefits of reciting Ayatul Kursi, which is very much evident from various reference of Hadith.

What Hadith says about Surah Baqarah ?

In hadith Prophet Muhammad (sallallahu alayhi wasallam) said: “Whoever recites the last two verses of Surah al-Baqarah by night that will suffice him” (Bukhari)

What are benefits for last 2 ayats of Surah Baqarah ?

The last two verses 285 – 286 of Surah al Baqarah are also called as Amana Rasul. It is narrated by Abu Masood that the Prophet Muhammad (sallallahu alayhi wasallam) said,“Whoever recites the two verses at the end of Surat-ul-Baqarah in the night, they will suffice him.” (Bukhari)

Which Surah to read to break black magic ?